The Wines of the Titanic 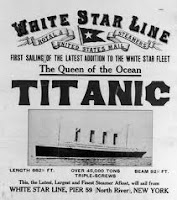 This Saturday, April 14th will mark the 100th Anniversary of the sinking of the Titanic, the largest vessel afloat in 1912. Registered under the British White Star Line, R.M.S. Titanic set sail from Southampton, England on April 10 with 2,207 passengers, including 885 crew members.  The ship struck an iceberg around 11:40 P.M. April 14th and sank just before 2:30 AM, April 15th in the North Atlantic.  Over 1,500 people were lost.  Only seven hundred people survived, mainly first class passengers. 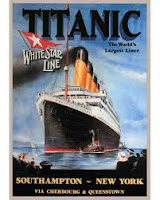 The Titanic was launched in 1911, but a formal naming ceremony was never held.  Nor was she christened with a bottle of Champagne, although that was the wine of prevalent choice for passengers.  When the Titanic pulled out on her maiden voyage, she was carrying over 1,500 bottles of wine, 20,0000 Champagne glasses, 20,000 bottles of beer and stout, and over 850 bottles of liquor.

The White Star Line preferred to offer passengers white wines like Champagne and Moselle, wines that could be served chilled.  Red wines presented a problem since the vibration of the steam engines could dislodge sediment in the older wines and make them unappealing to guests.  According to a 1910 White Star Line Wine List for first class passengers, included on a trip were ten different Champagnes, along with Sauternes, Moselle, Claret, Port, Sherry, Burgundy, and Vermouth.  This is probably similar to the types of wine the Titanic was carrying.

The one wine we do know that was on board was   Heidsieck Gout Americain (Ameican Taste) Champagne.  The R.M.S. Titanic, Inc. salvaged unopened bottles of Heidsieck Champagne from the wreckage. Corks were also discovered in the wreckage from Moet Champagne.  Rumor has it that 6 bottles of the Titanic Champagne were sold to a private Asian buyer in 2004 at an undisclosed price. 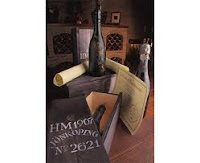 Interestingly enough, this is the same Champagne that was on board the Swedish ship, Jonkoping, when she sank in 1916.  Unopened bottles were discovered in the wreckage, off the coast of Finland, in 1997.  When bottles of this rare Champagne were opened, tasters said that the sweet flavors of the wine took time to develop in the mouth, but the light-bodied wine had a nice, mellow character.  One bottle sold for almost $300,000. 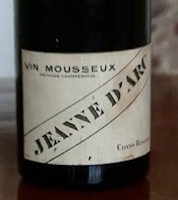 Last month, a Nova Scotia resident reported that she has a bottle of wine that supposedly came from the Titanic.  Betty Thomas of Halifax told reporters that the bottle of Jeanne d’Arc Vin Mousseux, Cuvee Reserve, was rescued by one of her ancestors, floating in the wreckage from the Titanic.  Although this wine was never shown on wine lists for the ship, it could have come from a passenger’s luggage.

Wine was served with each course of the first class passenger’s ten-course banquet dinner that fateful night and included Champagne, white wines, red wines, Madeira, and Cognac.  Most of the wines served were European. 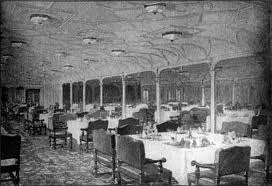 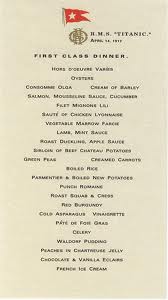 Actual wine bottles from the ship, along with other items are being auctioned today in Manhattan by Guernsey’s Auctioneers & Brokers.

Over 5,000 salvaged items are to be sold as one lot. The artifacts are owned by the American company, RMS Titanic, Inc., which has the salvaging rights to the site.  The collection was appraised in 2007 at $189-million.

Other items included in the auction are a bronze cherub that once adorned the Grand Staircase, table settings, jewelry and watches, clothing, and money.

The items cannot be sold individually by order of the court.  The court issued 19 pages of rules the buyer must agree to before the collection can change hands.  The buyer must also agree to properly maintain the collection and keep a portion of the artifacts on display for public viewing.  The final sale is subject to court approval. 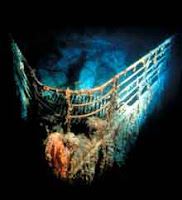 So tonight, I believe I will pour a glass of Champagne and toast the memory of the Titanic, her passengers and crew.  After one hundred years, we are still captivated by this ship.